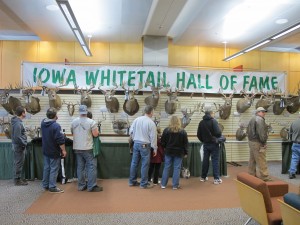 Thousands of deer hunting enthusiasts are heading for this weekend’s Iowa Deer Classic.

“We have nearly 270 different exhibitors from all around the country,” Finegan says. “This show brings them in from coast to coast. We have three archery tournaments going on as well as Iowa’s Biggest Buck Contest and we have numerous deer heads on display.”

Two of the main attractions include the Legendary Classic 300 Archery Tournament and Bow Hunters Challenge 3-D Pop-Up Shoot. Archers are encouraged to bring their bows to the event to compete.

“We attract people of all ages and from all around the Midwest and a few come from far reaches of the country,” Finegan says. “It’s great for families. There’s kids’ activities. We’ve got baby bear cubs you can get your picture taken with. There’s a BB gun shoot, we’ve got an archery shoot, just lots of activities.”

He says the Iowa Whitetail Hall of Fame always draws plenty of gawkers.

“Everyone that has ever shot a buck that qualifies for the Boone and Crockett record book gets an invite every year to bring their deer head to put on display,” Finegan says. “We normally get in the neighborhood of a hundred deer heads in the Hall of Fame display. We’re talking some monster deer…Iowa has some of the biggest and the best.”

The Iowa Deer Classic is underway through Sunday at the Iowa Events Center.