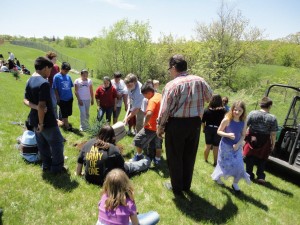 Trees Forever is wrapping up an industrious, two-year tree-planting project that will help make more than a dozen Iowa cities greener and more energy efficient, while helping other towns replace trees lost to natural disasters.

Meredith Borchardt of Marion, the group’s program manager and field coordinator, says it was a massive undertaking.

“We ended up planting 2,456 trees and those were spread out over about 20 communities,” Borchardt says. “That included 72 different projects.”

Ten Iowa communities were originally chosen to take part in the project after they were impacted by floods or severe storms and tornadoes. These included: Cedar Falls, Cedar Rapids, Columbus Junction, Keokuk, Marion, Muscatine, New Hartford, Palo, Parkersburg and Waverly.

“The projects basically fell into two categories,” Borchardt says. “They were either windbreak projects that can help save energy in the winter or they were large shade tree plantings near buildings to help with energy savings in the summer.”

It’s estimated the trees will generate an average of $108,000 in energy savings each year for the next 40 years. In addition to energy savings, she says trees provide other benefits to the community, including enhanced property values, reduced stormwater runoff and removal of pollutants and carbon dioxide from the air.

Borchardt says, “We tried to work with each local community to identify if, for example, a school didn’t have many trees or if the need was really in residential areas or if there was a new fire station or a new public building that really needed trees, then we tried to make our program match with what those local needs were.”

She says the trees will remove about 957 tons of carbon dioxide from the air each year, on average, for the next 40 years, the same as taking 170 passenger vehicles off the road every year.

The trees will also intercept an average of 5.3-million gallons of rainfall in these communities each year, significantly reducing the amount of runoff into our streams and rivers, helping reduce the potential of future flooding.