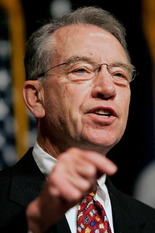 A bill that aimed to clamp down on corruption in Congress and on Wall Street was rejected on Tuesday, raising the ire of Iowa Senator Chuck Grassley.

The bill would have kept members of Congress from making investments based on “insider trading” information they gained from being lawmakers.

Grassley, a Republican, had offered an amendment that would have forced all so-called “political intelligence officers” to register as lobbyists.

Grassley says the proposal was killed by Senate Majority Leader Harry Reid, a Democrat, in favor of a much-weaker House version.

“Senator Reid’s decision is a real blow to good government and transparency and accountability,” Grassley says. “It’s a victory for Wall Street and a defeat for the American people. It’s a victory for the hedge funds and the big banks that like the secrecy coming out of the status quo.”

The Grassley amendment would have required registration and public reporting by anyone who deals with inside information that came from Congress. Another section would have toughened laws and penalties in public corruption cases.

“These political intelligence professionals getting into this business, they sell information to Wall Street and the information is used by hedge funds and investment houses deciding on selling or buying stocks,” Grassley says. “My amendment required transparency and the accountability that results from transparency.”

Grassley says Reid used a procedural move and abandoned the Senate’s stronger bill and went with the watered-down House version instead.

“Sixty senators, so filibuster-proof level, voted for my political intelligence disclosure amendment,” Grassley says. “The broader bill contained the provisions and received a 96-3 vote in the Senate. The majority leader ignored all of this in opting for the Senate bill.”

The legislation is known as the STOCK Act, for Stop Trading On Congressional Knowledge. President Obama had said earlier that he’d sign it.