You are here: Home / News / Biden to tout “insourcing” and criticize Romney’s “outsourcing” 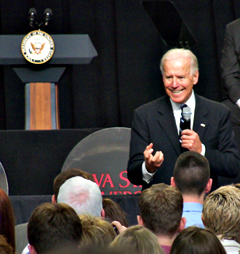 Vice President Joe Biden is delivering both a defense of President Obama’s policies and an offense against Republican presidential candidates today in eastern Iowa. Biden will be speaking late this morning to an invited crowd at PCT Engineered Systems in Davenport.

As he did at the beginning of March during a visit to Ames, Biden will be touting Obama Administration proposals that reward companies for “insourcing” — bringing jobs back to America. Biden stressed the concept during a telephone interview with Radio Iowa on March 1, arguing companies that outsourced manufacturing jobs to places like China and Mexico are starting to bring those jobs back to the U.S.

According to excerpts of his Davenport speech that were released early this morning, Biden will cite statistics indicating the American economy has added 430,000 new manufacturing jobs since January of 2010 — “the fastest growth since the 1990s.” Biden also will accuse Mitt Romney, President Obama’s likely Republican rival in November, of being “consistently wrong” in his approach to the economy. Biden will say Romney offers a “backward philosophy” that rewards “speculators rather than builders.”

Biden will visit Sioux City this afternoon for a private meeting with “grassroots” supporters.