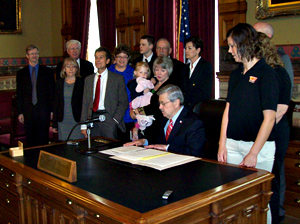 Iowa prosecutors soon will have “more legal tools” as they seek to charge people with exploiting children and teens with pornographic pictures and in prostitution rings.

Governor Branstad signed a bill this afternoon that seeks to toughen Iowa law in this area.

“Unfortunately, we all know that human trafficking and child pornography are tragic realities in our country,” Branstad said.

“As a state, it’s critically important that we find ways to protect vulnerable and innocent children from these unconscionable crimes.”

A young woman named Brittany stood near the governor as he signed the bill into law. When Brittany was 15, she was a runaway walking around a Hy-Vee in Cedar Rapids.

“A guy approached me and asked me if I wanted a modeling job and stuff to get money and stuff and at that point I was hungry and hadn’t showered in days and said yes. And that’s where it all began,” Brittany says. “I was transported to Chicago against my will. I was put in a hotel.”

Brittany was rescued from the prostitution ring by an undercover cop who arrested her. She wound up being adopted by her foster mom and is now a college student, seeking a degree in criminal justice. The head of Iowa’s Department of Justice — Attorney General Tom Miller — said human trafficking is an issue in Iowa.

“What we need to do is be more sensitive to the possibility of this, both on the sexual side and the labor side,” Miller said. “…These are very vulnerable people that are treated extremely badly. so this increases the awareness, increases the tools, and is good to move forward.”

The law had bipartisan support in the legislature, plus Miller — a Democrat — was invited by Branstad — a Republican — to attend the bill-signing event in the governor’s office. Chris Branstad, the governor’s wife, was in the room, too, as she’s a volunteer at Youth and Shelter Services, an organization that is part of the Network Against Human Trafficking.

According to Miller, the new law is an “important breakthrough” for prosecutors who, for example, now will be able to file a charge for each victim in child pornography cases. In addition, defendants will not be allowed to argue the victim appeared to be an adult, even though there were underage.