You are here: Home / Agriculture / Farmers markets set to open across state 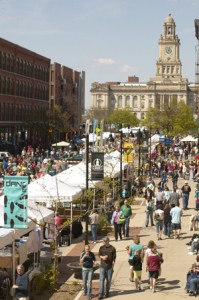 Many of the roughly 230 farmers markets around the state will be opening soon and Iowans will likely find some fresh produce they aren’t accustomed to seeing at this time of year.

In addition, orchard produce began blooming much earlier than normal. “Through the season, I think we’re going to be ahead of schedule,” Foss said.

“Typically, we get closer to fall before we start getting apples, but we may see apples a little bit earlier this year, same with strawberries and things like that.”

The U.S. Department of Agriculture reports Iowa has the 5th most farmers market per capita in the country. Between 15,000 to 20,000 people attend the Des Moines Downtown Farmers Market each week. Foss said the crowds are getting bigger because there are more growers and a wider variety of growers.

“Selling directly to your customer is a really great marketing tool for local growers and it has really become a passion for these growers and they weren’t doing it 10 years ago,” Foss said. “Many of our growers who are selling at the market are fairly new within the last five to six years.”

The Des Moines Downtown Farmers Market opens for its 37th season tomorrow. There will be over 300 vendors, including 30 who are new to the market this year. Two vendors will be offering a new meat – rabbit. There will be a total of 17 producers selling meats.