You are here: Home / Military / Amendment to defense bill could save Iowa Guard F-16’s 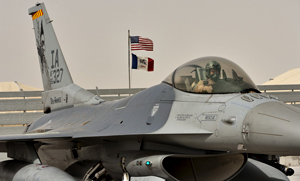 An amendment to a defense spending bill cosponsored by Iowa Congressman Dave Loebsack that would prevent the retirement or transfer of Air National Guard aircraft was approved by the House Armed Services Committee early this morning.

Loebsack, a Democrat from Iowa City, says the amendment would prevent the shut down of the 132nd Fighter Wing in Des Moines.

Loebsack says the amendment would also ensure that the F-16 jets in Des Moines aren’t retired without a full review.

“Any plan to retire them, there would have to be a review ahead of time, both by the Department of Defense and by the general accountability office. So there are those requirements in there, and those are good requirements to have of course,” Loebsack says.

“I’m hopeful that this is going to work out well in the end. I was really happy to do this, I did it in a bipartisan fashion. There were folks from all around the country concerned about these issues.”

Iowa’s entire congressional delegation spoke out against the Air Force plan to shut down the fighter wing in Des Moines and move its mission to unmanned drones. They argued that the Iowa unit is one of the most efficient in the nation and should not be shut down.

Loebsack is the only Iowan on the House Armed Services Committee, and says there will likely continue to be challenges on the use of National Guard units versus those from the regular Air Force. “That’s an issue that a number of us have talked to the Air Force about…and that may very well be something that we have to continue to confront as we move forward on this,” Loebsack says.

The Iowa Air National Guard says the proposed change in the Des Moines unit would lead to the loss of 378 jobs if it went through.