You are here: Home / Agriculture / Corn growers hope E-85 fueled Indy cars lead to use by every day drivers

The Iowa Corn Growers Association is hoping to ride the popularity of racing to more sales of gas that’s mixed with 85-percent ethanol. Association C.E.O., Craig Floss, says they will heavily promote the new link with E-85 and Indy car drivers.

“Indy had actually been using a 100-percent fuel-grade ethanol until this year. And what they’ve moved to now is an E-85, the same thing that we right here in Iowa can buy at a flex-fuel pump,” Floss explains. “And they’ve done this to be able to relate directly to the consumer. So a consumer can watch an Indy car driver use E-85 around the speedway, and then leave that track and go right out to an E-85 pump and fill up themselves in a flex fuel vehicle.” 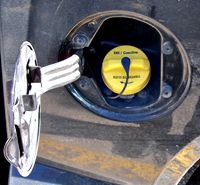 Gas cap on a flex-fuel vehicle.

Floss says race fans are very loyal and they are hoping the carries over to the fuel that comes from Iowa corn.

Floss says, “There’s tremendous loyalty in the race fan base for each of these various racing leagues –whether it’s Indy, whether it’s NASCAR — and they really want to do what those race car drivers are going. So the consumer relevance between Indy driver using E-85 and then promoting flex-fuel technology and E-85 out there for consumers is a great tie-in for us as corn growers.”

Floss says they are hoping the drivers will reach people outside Iowa and the cornbelt to tell them about E-85.

“They’re really talking it up wherever they go. So for example, the week before the Iowa Indy Corn 250 is the Texas race, and we’re going to be on there with messages about corn ethanol during the Texas Indy race. So that’s a place for us to get our message out,” Floss says.

Floss says the E-85 switch in Indy racing comes at a time when more and more of regular drivers are getting behind the wheel of vehicles that can use the blended fuel. “Of the new vehicles produced, well over 50% of them are E-85 compatible, and so we’ve got a lot of cars out there on the road today that are able to use any mixture between E-0 all the way up to and E-85, which is why the call them flex fuel,” Floss says.

“And also here in Iowa we are seeing more of the blender pumps, the flex-fuel pumps that might have a range of…ethanol inclusions, so you can have E-15, an E-30 or even an E-55.” Floss says E-85 is a renewable fuel that has benefited from the recent swings in gas prices.

“You know we’ve been really fortunate because E-85 has stayed well below the E-10 price, which is great for consumers, so there’s been somewhere between as much as a 50 and 60 cent spread between those. So we have been able to drive E-85 sales…because of that volatility at the upper end for E-10,” Floss says.

NASCAR racers use a 15% blend of ethanol in their fuel. Floss says Iowa is moving forward with plans to offer E-15 after getting regulatory approval. He says E-15 could be possibly available by late summer.