You are here: Home / Human Interest / Grassley says launch of private rocket shifts NASA to the back seat 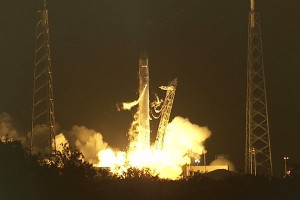 A nine-engine rocket lifted off from Cape Canaveral, Florida, early this morning on the first-ever privately-funded, commercial mission to the International Space Station.

Iowa Senator Chuck Grassley says the launch is bringing about a new era for America,  and the world, as NASA shifts to take a back seat in an industry it’s dominated for decades.

“Considering the fact that we don’t have our own shuttles to go up any more, they’re all in the museums now, we’re relying upon the private sector, we’re relying on cooperation with other countries, primarily Russia,” Grassley says. “This is the direction we’ve decided to go.”

Grassley says today’s successful blast-off by the unmanned Space-X rocket, called Falcon Nine, is somewhat saddening. “I feel a little loss of prestige in space exploration that the United States isn’t doing what it’s been doing for the last 40 years, 50 years, I guess,” he says.

The ten-year-old Space-X is based in California. On the plus side, Grassley says this giant leap in a new avenue of exploration could bring about new alliances and cooperation with other countries, in addition to ushering in a host of advances in technology and research.

Falcon Nine is scheduled to rendezvous with the space station in a few days. It’s a feat that’s only been carried out in the past by the U.S., Russia, Japan and the European Union. The capsule is carrying a half-ton of food and supplies to the station. The eventual plan is for the ship to carry astronauts.