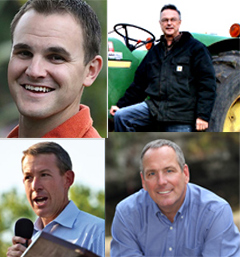 The Primary voting is over and the General Election match-ups are set in Iowa’s four congressional districts.

Iowa is losing one seat in the U.S. House. The state was divided into four congressional districts last year. In northeast Iowa’s first district, Democratic Congressman Bruce Braley of Waterloo will face Republican Ben Lange of Independence in November.

Lange lost to Braley by just under two percent in 2010 and Lange told Radio Iowa last night that he’s better prepared for the rematch.

“The second time I played T-ball, I was better at it as well,” Lange said.

Lange promised to be an aggressive challenger.

“It’s going to be my job to go out there and make sure voters really know where Bruce Braley stands on the issues, being the only member to vote against the balanced budget amendment from the Iowa delegation, voting seven times to increase the national debt limit,” Lange said.

Lange suggested Mitt Romney’s ability to carry Iowa in November may hinge in the results from the first congressional district.

“IA-1 is going to be absolutely critical,” Lange told Radio Iowa. “It potentially could be ground zero, if you will, for the Mitt Romney/President Obama campaign because IA-1 is the district that can be swung, you know, with Governor Branstad just winning this district by 5000 votes, with that registration advantage (for Democrats) being cut in half compared to last cycle.”

Lange defeated Rob Blum, a businessman from Dubuque, by an eight-point margin in yesterday’s primary. Blum isn’t ruling out another run for public office.

“The wound’s pretty fresh right now, but let’s put it this way: I feel like we’re a part of this movement nationwide of people who want less government, more freedom, more liberty,” Blum told Radio Iowa last night. “…I mean, I’m not going to go away.”

Democratic Congressman Dave Loebsack moved from Mount Vernon to Iowa City in the second district to avoid a Democratic primary battle with Braley. Then this spring Loebsack found himself in a primary. Loebsack easily defeated State Senator Joe Seng, a Democrat from Davenport, in yesterday’s voting. Loeback’s Republican challenger in November is John Archer, a lawyer from the Quad Cities.

“The last three-and-a-half years, he’s been a rubber stamp for President Obama’s failed policies,” Archer said. “He’s out of touch with the people of the second district of Iowa.”

Loebsack said “SuperPacs” and other national groups will target the second district .

Read election results on the Secretary of State’s website.

As you likely know, Iowa currently has five congressmen. Republican Congressman Tom Latham moved to Clive and will run against Democratic Congressman Leonard Boswell of Des Moines in November. Latham’s move out of Ames avoided a primary battle against fellow Republican Congressman Steve King. Former Iowa First Lady Christie Vilsack of Ames was unopposed in yesterday’s primary and is now the official Democratic nominee for the fourth district and the challenger to King’s bid for reelection.

“I think it looks very winnable,” Spiker told Radio Iowa last night. “We’ve got two great candidates from eastern Iowa to join Congressman King and Congressman Latham. Given the state of the economy, I think the Democrats have a lot to answer for, including a lot of failed policies.”

“Honestly, I don’t think either one of these are a big surprise,” Dvorsky told Radio Iowa, ” so I think that both Congressman Braley and Congressman Loebsack have been thinking along these lines.”

Voters will go to the polls again, in 153 days, to decide these General Election match-ups.