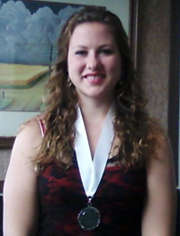 A central Iowa girl is headed for Mobile, Alabama, this weekend to take part in the 55th annual Distinguished Young Women National Finals.

Rachael Ostrem, of Radcliffe, will be the Iowa representative at the event, the finals which are set for June 28th through the 30th.

During the two weeks, she will participate in team-building activities, complete community service projects, interact with the Gulf Coast community through various events and engage in many hours of rehearsal in preparation for the three-night scholarship competition. The five categories in which they’ll be judged are: scholastics, interview, fitness, talent and self-expression.

Ostrem leaves for Mobile Sunday. She filled out the application initially just because it offered a nice scholarship but now that she’s learned all about the program she’s “in it for the experience.” Ostrem graduated from South Hamilton High School in Jewell last month and will attend William Woods University in Columbia, Missouri, this fall.

Ostrem says being named the winner would be a great honor — and a tremendous financial boost. The winner gets a $40,000 scholarship and basically does community service and helps with a host of other programs, including next year’s event.

Learn more about the program at:  www.distinguishedyw.org