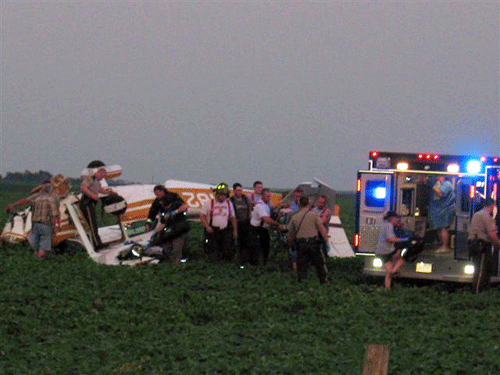 Two men were injured during the crash of a single-engine aircraft Friday evening in western Iowa.

The plane was owned and flown by a 75-year old man from Atlantic. The pilot, and his 59-year old male passenger, also from the Atlantic area, where taking off when the engine stalled. The plane came down in a soybean field and flopped onto its top.

Danker says the pilot suffered a possible broken femur, and while a report on the passenger’s condition was not immediately available, his injuries were likely not serious according to the sheriff.

Both men were transported by ambulance to a hospital in Atlantic. Their names will not be released until Monday. Danker said the NTSB and FAA will be out on Monday to investigate the crash and crash site.