You are here: Home / News / Obama urges supporters to “cut through the nonsense” (audio) 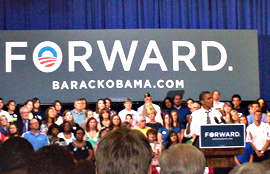 President Obama rallied with over 1,500 supporters in Cedar Rapids early this afternoon, urging them to get “fired up” about his reelection effort.

“Let me tell you — we have been outspent before,” Obama said. “We’ve been counted out before…but your ability to cut through the nonsense, your ability to identify what’s true…then all that money spent on TV advertising doesn’t matter.”

Obama suggested Republican rival Mitt Romney and his supporters would run “a bunch of different ads” with the same core message.

“They’ll all say, you know, the economy’s not where it needs to be and it’s Obama’s fault. That’s basically their idea. They know their economic theory isn’t going to sell,” Obama said. “That may be a plan to win an election, but it’s not a plan to create jobs. It sure as heck is not a plan to grow our economy. It’s not a plan to revive our middle class. They don’t have that plan. I’ve got that plan, Iowa.”

“I know that it is not always pretty to watch…so I know that sometimes it can be tempting to lose interest and to lose heart and to get a little cynical and, frankly, that’s what a lot of people are betting you will do,” Obama said. “But I’m betting that you won’t. I’m betting you will be as fired up as you were in 2008 because you understand that stakes for America.”

Obama met with a Cedar Rapids family before the early afternoon rally inside a Kirkwood Community College gym. During his rally remarks, Obama repeatedly compared the early days of his marriage to those of that local family. Obama talked of mortgages, car loans and child care bills as he touted his call for a tax cut for “middle class” Americans.

“We don’t need more top-down economics,” Obama said. “What we need is somebody who is going to fight every single day to grow the middle class ’cause that’s how our economy grows, from the middle out, from the bottom up, where everybody’s got a shot.”

But Obama later lumped himself in with Warren Buffett and Mitt Romney, suggested the trio was part of the “two percent” of Americans who could afford to pay a higher tax rate. Obama then accused Republicans in congress of holding 98 percent of the country “hostage” while they resist Obama’s call to extend the Bush era tax cuts to all but the top two percent of Americans.

“I will cut spending that we can’t afford…but what we’ve also got to do is ask the wealthiest Americans who enjoyed the biggest tax cuts…to just pay a little bit more.”

As Obama often does in Iowa, he briefly touched on his unpredicted victory in Iowa’s 2008 Caucuses, saying this was a state that gave him a chance when nobody else would.

“I still believe in you and if you still believe in me and you’re willing to stand with me and work with me and knock on doors with me and make phone calls with me, I promise you we will not just win this election, we will finish what we started,” Obama said to close his speech, “and we will remind people that America’s the greatest nation on Earth.”

The crowd earlier had erupted in applause and cheers when Obama spoke briefly of his signature legislative accomplishment, the Affordable Care Act. Obama called it the “right thing to do” and the president said while he’d accepted some adjustments, the basic tenants of the law are “here to stay.”