You are here: Home / Human Interest / Lincoln impersonator called a “homeboy from Illinois” 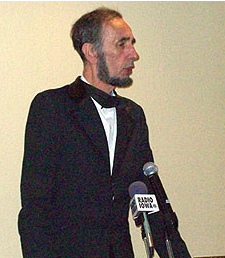 A Marion, Iowa, man who has been a popular performer at Republican events attended President Obama’s rally on the Kirkwood Community College campus yesterday.

Lance Mack wore a dark suit and a tall, stove-pipe hat to the event — and the president singled Mack out for a shout out.

“Abraham Lincoln is in the house,” Obama said.

Mack is tall, skinny and looks very much like the nation’s 16th president. Obama joked that Mack’s presence was a signal Lincoln supported his bid for reelection.

“My homeboy from Illinois,” Obama said, “and an outstanding Republican endorsee.”

After Obama’s speech, Mack shook Obama’s hand as the president made his way down a rope line.

“I said, ‘Mr. President,’ and he responded with a big smile and shook my hand and said, ‘Abe!'” Mack says.

Mack uses the word “fantastic” to describe the experience.

“Today’s Republicans either don’t know or won’t acknowledge if they do that the Republican Party of Abraham Lincoln of 1860 was the progressive party and the Democratic Party was the conservative party,” Mack says. “Mr. Obama, of course, greatly admires President Lincoln. He’s quoted him in many speeches. He also used Lincoln’s Bible upon which to place his hand for his inaugural oath.”

Mack describes himself as a “liberal Democrat” and an Obama supporter — a revelation that could cost him bookings as a Lincoln impersonator at Republican events.

“If that happens, so be it,” Mack says. “But I’m hopeful that Democratic functions may open up in exchange for that.”

In 2008, the Iowa delegates at the Republican National Convention invited the Lincoln impersonator to speak at one of their breakfast meetings. Mack was in the Twin Cities to participate in a “Civic Fest” associated with the GOP’s convention.

Mack says he puts on his dark suit and stove-pipe hat about twice a month for functions where he dresses up as Abraham Lincoln.