You are here: Home / Military / Governor, Congressmen speak out in support of Iowa Guard F-16 unit 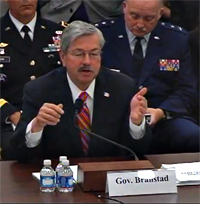 The U.S. Air Force has proposed phasing out the F-16 fighters based in Des Moines and transitioning the unit to unmanned drones.

Iowa Congressman Dave Loebsack, a Democrat and member of the House Armed Services Committee, introduced the governor during a subcommittee hearing on the issue. Loebsack says it is hard to understand why the Iowa unit would be selected to be phased out.

Loebsack says the 132nd has been recognized as the top F-16 unit in the country with the second lowest cost per flight hour.

“Yet they found out they were slated to see their F-16’s retired and over 370 personnel cut while they were deployed in Afghanistan, that’s amazing,” Loebsack says. “And in 2008 when Iowa was hit with the worst natural disaster to ever hit our state, the 132nd was deployed to protect our communities.” 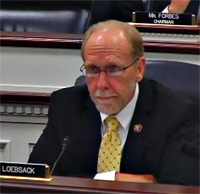 Governor Branstad, a Republican, says the 2008 flooding is a great example of the importance of guard units.

“I can go back even a little further, the crash of Flight 232 in Sioux City. In fact, the Air National Guard in Sioux City did the rescue. That was a terrible tragedy, a terrible crash, but a lot of lives were saved,” Branstad says. “It was so well managed because of their wonderful training and experience…that they made it into a movie. Charlton Heston played Captain Al Haynes.”

Branstad says there are many other examples of how the National Guard has helped the state. “We as governors are keenly aware of it because the buck stops with us if it is a domestic situation, if it’s a flood, a tornado, and ice storm or something like that. We have got to act to try to protect our citizens and do all that we can,” Branstad says.

He says federal officials don’t see the need to keep the guard units strong in the states. “I don’t think the Air Force has got quite an appreciation for the important domestic role that these units are playing, and the personnel. And it’s medical and the generators and the things like that that the Air Guard provides in addition to, obviously the pilots,” Branstad says.

The effort to keep the fighters in Des Moines has included the entire congressional delegation. Republican Congressman Tom Latham also testified before the committee. Latham said the decision to eliminate the F-16 mission appears to have been reached without proper concern for the impact such a reduction would have on national security.

“I’m concerned that the aircraft reductions being recommended to Congress are based purely on meeting the right budget number in the short term,” Congressman Latham said following the hearing. “These decisions should be based primarily on the expected future national security environment and on finding the most cost-effective ways to address it. The proposal to retire the 132nd Fighter Wing’s F-16s simply does not make sense under these considerations and could weaken our national security.”