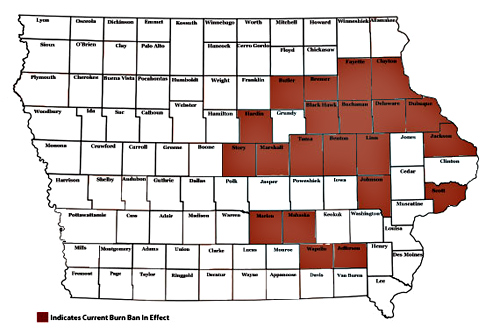 Open burning is not allowed in nearly one-quarter of the state. Officials in 22 Iowa counties have issued burn bans. Fires of any kind are prohibited because they could easily get out of control. Ron Humphrey, a spokesman for the State Fire Marshal, says that’s especially true in rural areas.

“The crops are starting to dry up and I mean we all heard the report from the USDA about crops are getting drier and yields going down,” Humphrey says. “…Until we get some rain, a lot’s not going to change.” Humphrey says there will have to be several days of significant rainfall before those bans on open burning are lifted. It only takes a spark to ignite a fire that can easily spread over many acres in rural Iowa, according to Humphrey.

“It’s just the nature of this time of year.” Humphrey says. “We get into July and August and the corn crop and the soybean crops start to get ready for harvest and they start dying and things are just going to get drier and drier from this time out, even if we do get the rain.”

Violating one of these burn bans is a simple misdemeanor and those caught setting a fire outdoors could face a 625 dollar fine and up to 30 days in jail. The state fire marshal has issued burning bans for 22 counties. Most are in eastern Iowa. Story County is the western-most county under a burn ban.