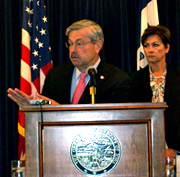 Governor Branstad has signed an executive order which ensures 38 inmates sentenced to life in an Iowa prison for a crime they committed when they were between the ages of 14 and 18 will stay in prison for many more years — decades in most cases.

A recent U.S. Supreme Court ruling granted those inmates the ability to be re-sentenced and perhaps paroled, as five justices ruled mandatory life prison sentences for juveniles was unconstitutional.

Branstad’s action today commutes those sentences to life in prison with the possibility of parole in 60 years.

“For those people convicted of lesser offenses they, we hope, can be rehabilitated,” Branstad told reporters this morning. “But we’re talking about the most heinous, the most serious pre-meditated crime: first degree murder.” 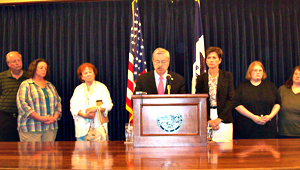 Mandy Myers is the daughter of 61-year-old Sheila Myers of Humboldt — one of the two northern Iowa convenience store clerks who were murdered in 2010 by a Minnesota teenager.

Myers, who attended Branstad’s news conference this morning, told reporters she is “grateful” for the governor’s action.

“We were worried that there was a possibility of parole and we didn’t want that, so we were happy to hear that this was going to be the change,” Myers said.

Margaret Drahaus of Ankeny also attended Branstad’s news conference, to send a message to the man sentenced to life in prison for abusing her nephew.

“We’re still here and we’re not going away,” Drahaus told reporters after the news conference was over. “…If we don’t come forward and put a voice on Jon, there is no one else.”

Her four-year-old nephew was admitted to a Des Moines hospital in 1992, but never recovered from his massive injuries and died about six years later. Dario Ruesga was charged and convicted of first degree murder.

“He was an adult — I don’t care. He was 17 and a half. He was an adult. He knew what he was doing. He did it with great flair,” she told reporters. “He systematically beat and tortured a four-year-old for weeks on end. He deserves the sentence that he got.”

Ruesga has served almost two decades in prison and, with the governor’s action today, he will be eligible for a parole hearing four decades from now.

“My only regret is that in 40 years when he comes up for parole I won’t be here to speak and I hope my sons will take my place and that they will speak,” Drahaus told reporters, choking back tears. “They lived with Jon. They know what he went through. I just hope that when I’m no longer here, they’ll step up to the plate — and I think they will.”

Brenda Bash, the supervisor at Polk County Crisis and Advocacy, said without the governor’s action, the family and friends of crime victims would have to endure the horror of the crime again and again in parole hearings or even possible re-sentencing hearings.

“Wounds that had begun to heal are again torn open as they relive traumatic events that shattered the life they knew,” she said.