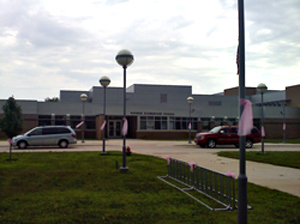 Crews are combing through the garbage from Evansdale, part of the search for two girls who went missing from the northeast Iowa community last Friday afternoon.

“Every avenue is being looked into and is being investigated,” Abben said.

Earlier today, Congressman Bruce Braley of nearby Waterloo said the family of one of the missing girls had asked him to make a direct appeal to the FBI, so the agency “would be engaged at the highest level” in what Braley said looks to him like an abduction.

When asked by reporters about Braley’s statement, Abben responded:  “He obviously didn’t talk to me or I’d have told him that the FBI has been more than cooperative with us and they have offered us any resources that we need.”

Abben also told reporters there are no plans to scale back the search. 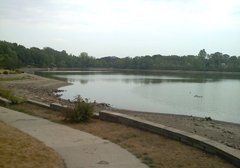 Meyers Lake in Evansdale 48 hours after officials started drawing it down.

“I have three kids of my own and you don’t want to give up hope,” Abben said. “I know the parents are not giving up hope…and neither is law enforcement.”

Abben said “many, many” people had been interviewed, but he would not say whether anyone had taken a polygraph test. One child’s father has told reporters he has been made to feel like a suspect.

“I haven’t talked to Mr. Morrissey. I don’t know why he feels that way,” Abben said. “But we expect the cooperation of everyone — 100 percent cooperation.”

The girls’ bicycles were found on a natural trail that surround a lake. The process of draining that lake to rule out drownings has taken longer than expected and officials say it could be Friday before the water from that lake has been pumped down the Cedar River.