You are here: Home / Crime / Courts / Missing girls’ case “now being handled as an abduction” 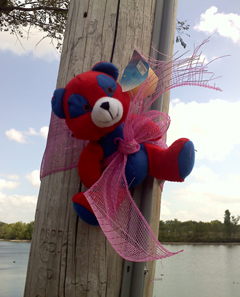 A teddy bear and pink ribbon on a pole near Meyers Lake in memory of the missing girls.

A deputy sheriff says authorities have “obtained evidence” related to two missing northeast Iowa girls — and drowning in a local lake has been “completely” ruled out.

“Investigators are confident that the two girls are not in Meyers Lake,” Abben said. “This case is now being handled as an abduction.”

Abben told reporters he would not reveal details about the evidence collected in the investigation.

“I will not tell you where the evidence came from,” Abben said. “…We have no suspects at this time.”

An FBI team using sonar equipment completed its search of Meyers Lake today. Authorities again conducted check-points on the streets of Evansdale today, too, at about the same time the girls went missing on Friday, July 13th.

“A tremendous amount of resources is being expended in this case and the law enforcement agencies that have been here in the past week are still here today,” Abben said.

The girls were last seen at about 12:15 last Friday afternoon. Their bicycles were found on a nature trail, near Meyers Lake in Evansdale. Daniel Morrissey, the father of missing 10-year-old Lyric Cook-Morrissey, was place under “pretrial” supervision today — a day after another relative told reporters he and his estranged wife had been advised by an attorney to stop talking with authorities and to refuse to take polygraph tests. Dan Morrissey is scheduled to stand trial in September on a meth-related charge and Abben was asked by reporters if Dan Morrissey was a suspect in the girls’ disappearance.

“Everybody is being checked into and that’s all I’ll say about it,” Abben told reporters, adding a court “oversight” had failed to place Morrissey under pre-trial supervision.

The reward for information that would lead to an arrest and conviction in the case of the missing girls has grown dramatically, to $50,000.