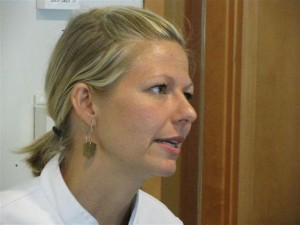 A contest to win a valuable “starter-kit” for a restaurant in Grinnell attracted 44 entries from seven states and a chef with family ties to the area has been named the winner.

It was called “Iowa’s Best Bite Restaurant Challenge.” Applicants submitted videos explaining their dreams for a restaurant. A panel of local residents and industry experts selected the winner.

“We had each candidate present their signature appetizer, salad and entre and then they underwent an hour and a half roundtable interview with our community panel and it was pretty intense,” said Bryan Schultz, who helped organize the judging. “There were questions that ranged everywhere from their financial acumen all the way to how committed they were to the community.”

Chef Carly Groben won the competition and gets $35,000 in start-up cash as well as three months of free rent for the space on Main Street in Grinnell.

“The restaurant ‘Goldfinch’ will always have some nightly specials, different entrees, featuring (products) from local farmers, some kind of exciting dishes,” Groben said. “And then the bar ‘Goldies’ downstairs will be able to do some fun events like show black and white movies, feature local musicians, maybe do an all-Iowa wine and beer night.”

Groben’s video entry in the contest said she’d “celebrate all of Iowa” in the restaurant’s menu and, after she won, Groben suggested the plan is to offer familiar food, with a twist.

“I’m exhilarated and I’m so honored,” Groben said. “I’m just so excited and ready to get started.”

Dick Knapp owns the building that will house the new restaurant and bar.

“Carly really knocked it out of the park. We loved her presentation; her passion; her attention to detail in terms of the atmospherics, the finishes. We’re going to have a woman executive running the restaurant and that really comes through,” he said. “Most of all we thought her food was terrific.”

Last year “Food and Wine” magazine named Groben one of the best new chefs in the Midwest because of her success with a Des Moines restaurant called Proof which featured North African and Mediterranean flavors. She sold Proof this past spring, along with another restaurant called, Flour Pizza.  Knapp, the owner of the building where Groben will open her restaurant in Grinnell, said her reputation is well-earned.

“The food will be the star of the show,” he said. “She has a rock-star type of following in terms of being a culinarian.”

Groben hopes to open the new restaurant by Labor Day.