You are here: Home / Sports / Chow back in Iowa after coaching another Olympian to gold medal (AUDIO) 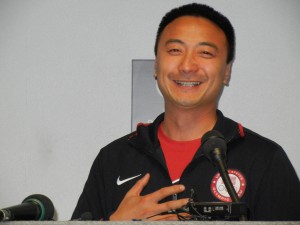 The coach of gold medal winning gymnast Gabby Douglas was greeted by dozens of his friends, family and students upon his arrival back in Iowa Wednesday.

It’s the second time Liang Chow has returned to Iowa after one of his athletes claimed Olympic gold. He was surprised with the reception at the Des Moines Airport. “This is just a wonderful, warm feeling to be back home,” Chow said.

Over the past two years, Chow worked with Douglas – who won team gold and the individual all-around gold medal.

Chow said the experience in London this year was much different than four years ago in Beijing. Shawn Johnson was expected to do well in 2008 after dominating world gymnastics competitions the previous three years. “Gabby was in a different situation because nobody expected much out of her, other than the ones who really know her and knew she had the potential to be on the very top,” Chow said.

After claiming her two gold medals, Douglas made major mistakes on the uneven bars and the beam – and failed to medal in those events. Chow said although his time in London was rewarding, it wasn’t always enjoyable. “The experience (involved) lots of challenges and lots of struggles. Now, when I think back, it was fun…sort of,” Chow said with a laugh. “I’m just glad everything turned out good.”

The best young gymnasts from around the world will now be knocking on Chow’s door and he could relocate his gym anywhere, but Chow doesn’t plan to leave Iowa. “I feel like I can’t find a better place to live,” Chow said. “This is my dream home.”