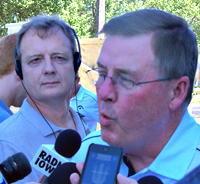 New University of Iowa offensive coordinator Greg Davis says the offense will be a little different this year, but he says most of the change for players will be picking up a new way of identifying plays.

Davis says one of the biggest challenge is they were only able to lay the foundation of the offense in the spring, and now this fall they are adding some bells and whistles, “so it’s a constant learning process.”

Davis who previously coached at Texas gave the media a verbal example of what the players are dealing with.

“The terminology is entirely different, you know the way things are called and being able to enunciate the plays, you know: R-King-n-scat-four-seven-fake-zero-fair-flat, and not bat an eye,” Davis said after reeling off a play call.

Davis will have senior quarterback James Vandenberg making the calls at the line, something he said will be a big help. “He brings what you want out of the quarterback position, he’s very confident guy, he’s a good leader,” Davis explains.

“Our quarterbacks make a lot of decisions at the line of scrimmage and when you’re letting them do that within certain parameters, you want to know that they are spending the time that they are going to get you in the play you want. I have total confidence in James.” Davis was asked to compare Iowa’s program to Texas.

He said the biggest similarity is the stability, with Kirk Ferentz being the coach for 14 years and having a great idea of what he wants to do. Davis wants to run the ball, but he said he wants to do what it takes to move the ball.

“Just try to adjust, but at the same time, always trying to find some kind of balance between the run and the throw. The thing I told the offense is that balance doesn’t mean that each game you run 40 and you throw 40, it means that you can win the game either way. You get a bad weather game are you going to be good enough to run the ball. If fall behind are you going to be good enough to throw the ball more, play out of the gun more, that’s what balance means,” according to Davis.

Davis says he won’t have a problem with Iowa’s young running backs as he says that’s one position where you can be younger and still do well.