You are here: Home / Agriculture / Big pumpkins not as big this year at Iowa State Fair 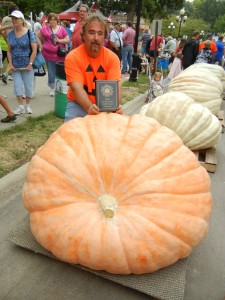 The extreme heat and drought this summer has affected all Iowa crops, including the giant pumpkins put on display at the Iowa State Fair.

“This (pumpkin) was not the original one I wanted on the vine. I actually wanted two others, but they both aborted due to the heat and rotted,” Miller said. “This one here was my third choice and all the sudden, it started to grow. It grew about 35 pounds a day when it decided to start chuggin’ along.”

The keys to growing a gargantuan gourd, according to Miller, include spraying for bugs and fungus, plenty of pruning and just keeping a close eye on the pumpkin. “As a matter of fact, this one here, I was really watching it but two days went by before I looked at it again and a rabbit had taken a couple nicks out of the front of it. I thought, oh no, we’re going to lose it because a rabbit’s going to eat it,” Miller said. “So, we put moth balls around it and that kind of stopped all of that.”

Miller’s day job also gives him a bit of an edge on the competition. “I work for a fertilizer company,” Miller revealed. “I have all the access to fungicides, insecticides and fertilizers. So, that kind of helps quite a bit.”

For presenting the heaviest pumpkin, Miller collected a first place plaque and a $1,300 check. He noted the last time he won the big pumpkin contest at the state fair, around 10 years ago, he collected just $21. The art of growing a giant pumpkin, like the prize, has clearly evolved. Ten years ago, Miller’s prize winning pumpkin weighed just 300 pounds.

Up next for Miller and the other growers? The annual Anamosa Pumpkinfest, which draws entries from several nearby states, on October 6.