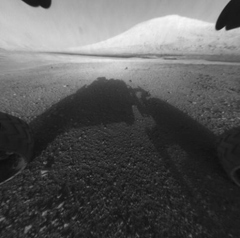 Our newest close-up view of the Red Planet is thanks, in part, to cameras from an Iowa-based company.

Millions of people around the globe have seen the pictures being sent back to Earth from Curiosity, the latest rover NASA sent to Mars. Rockwell Collins, headquartered in Cedar Rapids, can take the credit.

Shortly after this week’s landing, following a 352-million mile journey, the first black-and-white photos of the rocky landscape were celebrated as it meant the rover survived its complicated landing. A dozen cameras aboard Curiosity have lens assemblies from Rockwell Collins.

Eight of them are 3-D Hazcams, mounted near the wheels, to spot hazards in the rover’s path. The other four are Navcams, mounted on the mast, to aid with navigation on the desolate planet.