You are here: Home / News / First Lady to join the president in Dubuque, Davenport 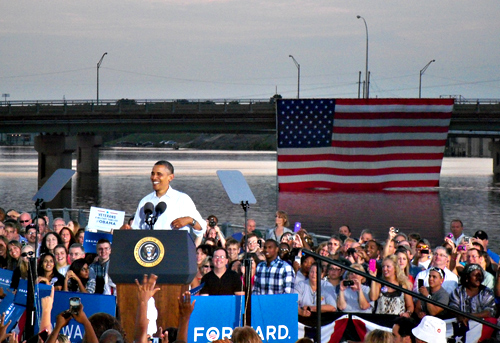 President Obama speaks during his stop in Waterloo.

Barack Obama has been defending his three-and-a-half years as president during his three-day bus tour through Iowa, along with a focused line of attack against his Republican opponent Mitt Romney on the issue of wind energy.

On Tuesday, Obama spoke to crowds in Oskaloosa, Marshalltown and Waterloo. Obama also visited a farm near Haverhill that has five wind turbines. The president notes the farmer earns rent from the companies that own the wind turbines and harvest the electricity.

“Now Governor Romney has decided that we should end the tax credit that we provide for wind power…He wants to get rid of it,” Obama said during a speech in Marshalltown. “At a moment when home grown energy is creating new jobs here in states like Iowa, he wants to bring an end to it.”

A spokesperson for Obama’s Iowa campaign suggests Romney is “running against the wind” so he “can run with big oil” and Obama amplified on that during his remarks in Marshalltown. 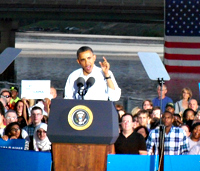 “I want to stop giving $4 billion in taxpayer subsidies every single year to the oil companies that are doing just great and let’s take some of that money and continue to invest in home grown, renewable energy right here in Iowa and all across American that can put people back to work.”

Romney’s campaign website has ridiculed “windmills” as an economic failure, but Romney’s Iowa campaign spokesman yesterday said Romney is a “strong supporter of wind power” who will “set the industry on a course for success” by removing regulations and encouraging market-based competition rather than extending the wind production tax credit.

During his trip through Iowa, Obama also has been reminiscing with Iowans about the 2008 campaign and his victory in the Iowa Caucuses. Obama has thrown out this bit of caution, too: “We knew it wasn’t going to happen overnight. We knew it was going to take more than one term, maybe even more than one president to get back to the place where everybody’s got a fair shot, but we started.”

Like his Republican rivals, Obama has characterized the 2012 election as a choice between two different economic visions for the country. In many of his Iowa speeches this week, Obama has ridiculed the “fairy dust” of trickle down economics.

“For all the naysayers out there and the folks who try to paint things as dark as they can — especially during election time, the fact of the matter is there is no country on Earth that wouldn’t trade places with us,” Obama said, and the crowd in Marshalltown applauded. “We’ve got the tools to make sure we are living up to this country’s promise.”

First Lady Michelle Obama is scheduled to appear with the president today at stops in Dubuque and Davenport.