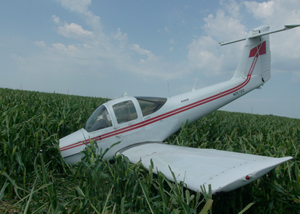 This plane crash landed in a corn field near Plymouth.

A student pilot and instructor from the Des Moines area escaped injury when their single-engine Piper Tomahawk airplane crash into a farm field just south of the Cerro Gordo and Worth County line west of Plymouth at about 12:30 this afternoon.

Cerro Gordo County Sheriff Kevin Pals says they were called to the crash in a seed corn field farmed by Steve Smith.

He says it was a small single-engine aircraft was occupied by a flight instructor and a student that experienced engine trouble in the area and chose the field to land their plane. Pals says they were lucky to crash in a rural area.

He says it was the “best case scenario” that they walked away with just a few minor bumps and scrapes.  The pilot and instructor, were identified as 65-year-old Tom Ballard of Granger and 27-year-old Geoffrey Tayner of Johnston.

Both refused to make comments about the crash at the scene.