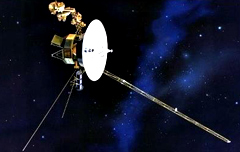 A school in southeast Iowa opened under a new name today to honor a native son. Burlington’s Edward Stone Middle School is named after a key scientist in NASA’s Voyager program.

Stone, who was in Burlington for his 58th high school class reunion, says Voyager One is now 11-billion miles from Earth and is about to begin its last mission, exploring interstellar space with a cosmic ray spectrometer, a tool he helped create.

“We designed this instrument for this part of the mission,” Stone says. “These are very high energy atomic nuclei which were accelerated by the explosion of super nova nearby the sun maybe five, ten, 15-million year ago. Once we get out into interstellar space for the first time, we will be able to detect how many of these lower energy cosmic rays from the galaxy are out there.”

After graduating from Burlington High in 1954, Stone attended the community college in Burlington for two years before going to the University of Chicago to get his masters and PHD in physics. In 1972, he became Voyager’s project scientist and later was named the program’s chief scientist.

The two spacecraft were launched in 1977. Stone says nobody in the project knew whether the far-flying machines would function 35 years after launch, but remarkably, they’re still sending home data. “Voyager One is headed northward up out of the plane of the planets and Voyager Two is southward,” Stone says.

“They’re both generally headed in the upwind direction, the direction that the interstellar wind is coming at the sun from. The two spacecraft will be orbiting the center of our galaxy basically forever.” When he was in middle school, Stone says he knew wanted to be involved in science but never imagined he would work with a spacecraft traveling further from Earth than any object sent into space.

“Middle school is a key formative period in education,” he says. “I think what a new middle school does is tell the student that the community believes education is important. Hopefully, they will find that it also ultimately has influenced their career just as it influenced mine.”

The Voyager mission will end around 2025 when the power supplies on the two spacecraft are finally exhausted.