You are here: Home / News / Romney, in Bettendorf, asks supporters to convert an Obama ’08 voter 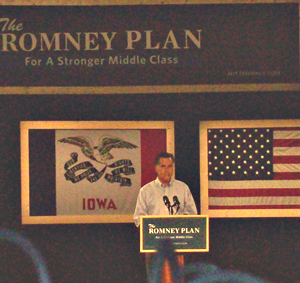 “What he said was very revealing…What he said was his philosophy. He said that if you have a business, you didn’t build it. Someone else did that,” Romney said. “…I don’t know where he was going with that because in this country…we value people who work hard. We recognize the power of individuals.”

In July Obama suggested businesses were given an economic lift by government-financed roads, bridges and schools. Today, employees of the business Romney visited stood behind him on stage, wearing t-shirts which read “Government Didn’t Build My Business, I Did.” At one point Romney turned to speak to the group.

“To the team back here that did build this business, congratulations on the work you’ve done,” Romney said.

Romney’s running mate, Paul Ryan, was in Virginia today touting the same theme in remarks outside a hardware store. Inside the Bettendorf business, Romney invoked the memory of civil rights icon Rosa Parks and spoke of the man who founded Jimmy John’s to drive home his point that the “power of individuals” has been the basis of America’s greatness.

“President Obama, bless his heart, has tried to substitute government for free people and it has not worked and it’ll never work,” Romney said, to cheers and applause from the audience gathered on the factory floor.

Rob Zimmerman — the co-president of LeClaire Manufacturing which was the site of Romney’s event — also criticized Obama during his remarks to the crowd.

“Over 30 years of working in LeClaire Manufacturing, I haven’t had one person come up to me and say, ‘Hey Rob, it’s a good thing the government helped you make this company grow.’ Not once,” Zimmerman said, to cheers from his employees and the Romney supporters invited into his business for the campaign event.

Romney began his remarks by praising Zimmerman’s speech and suggesting the eastern Iowa businessman should run for office. Romney concluded his remarks with a new challenge to his Iowa supporters.

“I want you to each find one person who voted for Barack Obama last time and convince them that we should take a different course. Remind them how disappointing it’s been over the last three-and-a-half years,” Romney said this afternoon in Bettendorf. “Find ’em. Talk to them. Get them to the polls.”

“We’ve got to get people who voted for Barack Obama last time to vote for me and Paul Ryan this time if we’re going to win,” Romney said.

Polls indicate the 2012 race between Obama and Romney here in Iowa is close, if not tied.

A few minutes before Romney began speaking in Bettendorf, the Obama campaign announced the president would return to Iowa next week for a stop in Ames on Tuesday and an event in Des Moines on Saturday, September 1.

Obama for America spokeswoman Liz Smith issued a written statement in response to Romney’s remarks in Bettendorf that did not mention the “you didn’t build that” comment.

“Even independent economists have said (Romney’s) policies wouldn’t create a single job and could actually push us back into recession,” she said. “This isn’t a recipe for strength; it’s the same failed formula that crashed the economy and devastated the middle class in the first place.”