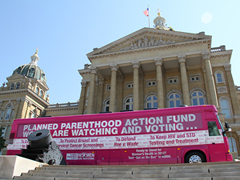 Abortion advocates are using this bus in their campaign tour.

Abortion rights advocates are planning a more robust political effort this year in Iowa, and the appearance of a pink bus at a Des Moines rally today marked the public roll-out for their campaign.

“The women of Iowa are watching and listening to what the candidates are saying,” June says, “and they intend to vote in favor of women’s health care and access to women’s health.”

But June says the Planned Parenthood Action Fund will be active in Iowa congressional campaigns as well as races for seats in the Iowa House and Senate. She points to laws and constitutional amendments targeted at abortion that have advanced in the legislatures of other states.

“We are stepping up our efforts to assure that we do not become subject to these terrible restrictions on our constitutional rights,” June says. The “Women are Watching” bus tour is making stops in Iowa and 10 other battleground states.

The bus tour began before a Missouri Republican suggested that in cases of “legitimate rape, the female body has ways to try to shut that whole thing down” and prevent pregnancy, but June says the firestorm over that comment has added urgency to the effort.

“I believe the recent developments attacking women’s health care and women’s rights has in fact generated a great deal more concern and, therefore, activism on this,” June says. Starting in July, the Planned Parenthood Action Fund began running phone banks to turnout like-minded Iowa voters and the group has been running advertising in Iowa as well.