You are here: Home / Human Interest / Instruments designed by U-I researchers set to go into space 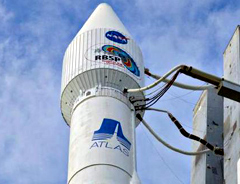 Two identical satellites carrying instruments designed and built at the University of Iowa are scheduled for launch Saturday after a one-day delay in the count-down.

The satellites will be put in Earth orbit to study radiation belts and other weather extremes in space.

Craig Kletzing, a U-of-I professor of astronomy and physics, says if you’ve ever used a cell phone or traveled by plane, then you’ve been affected by what’s happening in the atmosphere miles from the Earth’s surface.

“We want to understand this environment so we know how to build satellites to withstand it and also so we understand how satellites age,” Kletzing says. If problems develop with communications satellites, other satellites can be switched in, but he says, “if we can understand better how they start to age, we can make that a more economical process.” 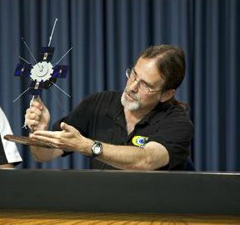 U-I astronomy and physics professor Craig Kletzing, holding a model of one of the spacecraft.

The belts were discovered in the 1950s by the late James Van Allen, also a U-of-I astronomer and physicist.

Kletzing says he and the other researchers will use instruments on board the satellites to collect data on radiation, magnetic waves and electronic fields.

“We really want to get to it so can understand how things actually work and then we can build models that let us predict based upon things we can observe, like what the sun is doing,” he says.

“That’s a big goal of this mission, to advance physics so we can build these models that let us predict.”

Kletzing says an 11-year solar cycle is expected to peak in 2013. He says that could mean an increased potential for power surges from space that could knock out electric transformers that support heating, lighting, air conditioning and many other necessities of daily life.

Launch for the R-B-S-P is now scheduled for 3:07 A.M./Central on Saturday.