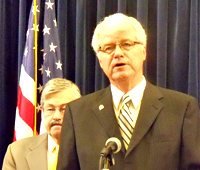 The governor and lieutenant governor announced a series of  “community conversations” on the efforts of the STEM Advisory Council that’ll begin next week.

Allen says they’ve already made some good progress. “First, for the first time in Iowa as a result of the work of the council, we now have six regional STEM hubs in place to ensure that all students in areas of the state are provided access to STEM’s best practices and most advanced thinking,” according to Allen.

“These six STEM regional hubs, each having a manager with well-defined responsibilities, are working as a network with pre-K through 12 schools.” He says each of the STEM networks has an advisory board. Allen says they’ve also selected 12 “outstanding STEM programs that can be scaled up and implemented.”

“Four our pre-K through 12 students and teachers, both in class and after school programs are included,” Allen explained. He says the programs were selected on a competitive basis from across the state and have been proven to increase student achievement and interest in STEM. 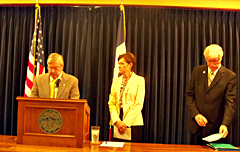 Lt. Governor Reynolds says the community meetings help people learn more about the program, as she says some people think it is only for a limited number of students.

“We want to make sure that kids no matter where they live, know that STEM literacy and STEM education applies to almost everything that they do. So part of the dialogue is to have parents and grandparents participate in the conversation so we can talk about the importance of STEM and how they think it will impact their child’s life, their grandchild’s life,” Reynolds says.

Governor Branstad says the STEM effort has had good bipartisan support. “I think this is a program that people recognize is really focused on the future. Focused on quality good-paying jobs for the future, and getting Iowa’s young people ready to compete and achieve in those critically important areas,” Branstad says.