You are here: Home / Human Interest / Groups hold homeless stand down at the state capitol 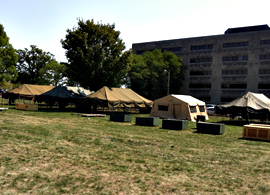 Tents for homeless stand down.

Dozens of military style tents are set up on the Iowa State Capitol grounds in Des Moines for an event to benefit the homeless.

Several veterans affairs groups, churches and service organizations are behind the annual “Homeless Stand-down” – which begins this evening and runs through midday Sunday.

Event chairperson Kim Neal says one goal is to help people better prepare themselves for landing a job.

Free haircuts, dental work and flu shots will be offered to many of those attending the event. A U.S. District Court Judge, an attorney and representatives of Iowa Legal Aid will also be on hand. “We have a large population within the homeless population who have legal issues,” Neal said.

Sleeping tents are available on site through the weekend. Last year, more than 1,700 people were helped at the event and 3,800 meals were served.