You are here: Home / News / Movie marquee moving back in place in Cedar Rapids 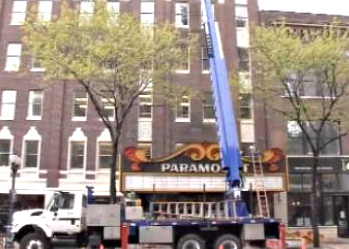 Work is underway to replace the marquee at the Paramount Theatre in Cedar Rapids.

A big, glowing sign of flood recovery is going up in downtown Cedar Rapids today.

Crews are using a crane to hoist the historic Paramount Theatre marquee back to its original location above the front entrance of the 1920s venue.

The 3,000 pound sign was removed in April to be repaired after damage done by the flood of 2008. Pat McAllister, spokesman for Nesper Sign Company, says the old sign will have some new features.

“If people remember what was there before, there was what was called changeable copy where staff would manually change out the shows that were coming,” McAllister says. “This is going to be an electronic message center that’ll be operated off computer and you can do some dynamic graphics with it.”

The new marquee will also boast the energy-efficient L-E-D style of lights instead of bulbs. Despite the changes, he says the marquee will still have the original color and flair as many of the old pieces are intact and overall the sign will look much like it always did.

“It’ll bring a little more vibrancy back to downtown much like some of the other things that are happening, other construction that’s taking place,” McAllister says. “There’s been a lot of questions asked, ‘When’s this going back up?’ and hopefully, just the fact it’s going back up brings more of a namesake back to the community, back to the Paramount and it can be a showpiece.”

Cedar Rapids-based Nesper built the original marquee in 1925 and did renovation on it in 1985, so this is the third time over nearly nine decades that the same company has worked on the sign. Installation should take through  Tuesday.

The Paramount is slated to re-open the first weekend in November.