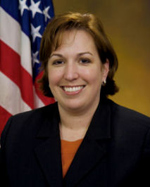 For the first time, Iowa will have a woman as a federal judge presiding over the state’s Southern District, covering cities including Davenport, Des Moines and Council Bluffs.

The U.S. Senate confirmed Stephanie Rose to the post on Monday night on an 89-1 vote. Senator Tom Harkin, a Democrat, nominated her for the post.

“Stephanie Rose possesses in abundance the personal and professional qualities we expect from those that we consider to take on the profound responsibilities of a federal judge,” Harkin said during a speech on the Senate floor Monday.

“She is a superb attorney. And among jurists, prosecutors and the defense bar she has a reputation as someone who is unfailingly fair and ethical and who possesses exceptional legal ability, intellect, integrity, and judgment.”

“She’s had a pretty remarkable record as a prosecutor and now, in the last four years, as a U.S. Attorney for the Northern District of Iowa,” Grassley said this morning during a telephone conference call with Iowa reporters.

“She could easily have commanded a big salary with a top law firm,” Harkin said in his Senate floor speech. “Instead, she opted for public service and long hours as a federal prosecutor, working to uphold the rule of law, making our neighborhoods safer, and advancing the cause of justice.”

Rose has served in the Cedar Rapids-based U.S. Attorney’s office since 1997, prosecuting more than 260 cases, from drug offenses to immigration violations and money laundering. Grassley said judges tell him Rose is a “highly skilled” attorney.

“After becoming acquainted with her, although I knew her a little bit as U.S. Attorney, I’m confident that she’ll be a fair and impartial judge for those who come before her court,” Grassley said this morning.

“It’s because of this outstanding service she’s had as a prosecutor and U.S. Attorney that she was one of three names that Senator (Tom) Harkin, because he’s a Democrat senator and we have a Democrat president, suggested to the president for his approval, that he was backing any of those three.”

During his speech on the Senate floor Monday, Harkin began by thanking Grassley for his cooperation on the nomination.

U.S. Senators from the president’s political party get to nominate people for openings in the federal court system in their state. That means during George W. Bush’s presidency Senator Grassley nominated future judges and now, during Barack Obama’s presidency, Harkin is nominating future judges.

Read the text of the floor statements Harkin and Grassley made about Rose’s nomination.