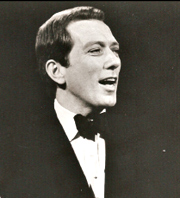 Iowa native Andy Williams — the famous crooner of ballads like “Moon River” and “Can’t Take My Eyes Off of You” — has died. He was 84.

His family released a statement saying Williams died at his home in Branson, Missouri, after a year-long battle with bladder cancer.

During an interview last year with a radio station near his Missouri home, Williams reminisced about his annual Christmas specials on television and their creative connection to his hometown.

“In Wall Lake, Iowa — where I grew up — Christmas was a big thing as it is all over the nation,” Williams said.

“But in a small town of 479 it’s a little different because people are so close to each other. We all know each other and string lights from one house to the next in many cases and the doors are always open — or at least they were then — for people to come in for hot chocolate or egg nog or to visit and I just grew up in that atmosphere.”

“I just grew up in that atmosphere of Christmas being not only the longest holiday we have, but the happiest and the people are in the perfect mood and, you know, it’s just great,” Williams said last year in that radio interview. “And I’ve enjoyed Christmas ever year since I was a kid.”

Williams singing career began when he was eight. He and his three older brothers performed on radio as The Williams Brothers and were the back-up vocalists for Bing Crosby’s “Swingin’ on a Star” recording in 1944.

Williams began his solo career in 1951. He sang the theme song to the movie “Love Story” in 1970 and, while Audrey Hepburn sang “Moon River” in the movie, it became a standard for Williams after he performed it at the Academy Awards ceremony in 1962. In 1992, Williams built the “Moon River Theater” in Branson.

Howard Andrew Williams was born on December 3, 1927 in Wall Lake, Iowa — the son of a railroad worker. This year marked his 75th year in show business.

“The Andy Williams” show debuted on television in 1962 and went off the air in 1971. He introduced “The Osmond Brothers” to the country when the Utah family act made an appearance on the program in 1963.