Republican vice presidential nominee Paul Ryan is due in Dubuque early this evening for an event as Loras College and he’ll make appearances Tuesday in Clinton, Muscatine and Burlington.

Democrats started traveling the state this past weekend with a “Gotta Vote” bus tour and they stopped this morning in Dubuque.

Democratic National Committee chairwoman Debbie Wasserman-Schultz is on the tour. “We’re so incredibly close to the finish line,” Wasserman-Schultz said Sunday during a news conference in Des Moines. “…We need to be in a full-on sprint all the way to Election Day.” 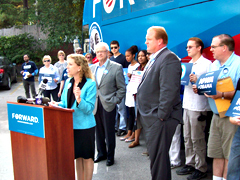 According to Wasserman-Schultz, Democrats have a “fully-functioning ground game” in Iowa for every day voting is allowed in Iowa.

“We need to make sure that we leave it all on the field,” she said Sunday in Des Moines, “that we all commit to being ‘no task too small’ people.”

The Democrats’ “Gotta Vote” bus tour will make stops in Cedar Rapids this afternoon and in Iowa City early this evening.