Mountain lion shot in the back yard of a Des Moines home. (Photo courtesy of the DNR)

There were reports of a mountain lion sighting from Madison Elementary School around 7:30 a.m.

Police were then called about the lion being near seen near a house in the 3900 block of Columbia Street at 9:30.

A police news release says upon searching the area officers located mountain lion under some plants in the back yard of the house.

The release says officers knew, due to the size of the mountain lion, that its escape would be of great danger to the public. The lion made a dashing move leaving officers no choice but to shoot the lion.

It was determined to be a male mountain lion that measured 6’3” from its nose to the end of it’s tail. The mountain lion was removed by the Iowa Department of Natural Resources. 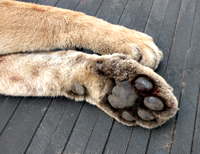