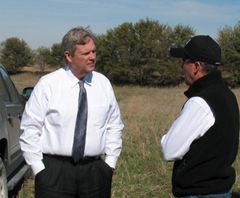 U.S. Agriculture Secretary Tom Vilsack stood on a portion of a roughly 200-acre plot of land near the Cass/Pottawattamie County line Monday afternoon to announce a plan to enroll more acres in the Conservation Reserve Program.

“To try to increase, significantly, the pheasant population,” Vilsack said. Pheasants Forever, the Nature Conservancy, and similar groups have embraced the project, which is under the State Acres For wildlife Enhancement Program — called SAFE for short.

The U.S.D.A. had earlier announced its goal of getting one million acres enrolled in that program. Vilsack said Monday the U.S.D.A. is committed to adding 400,000 CRP acres across the country, with a number of states having additional acres allocated under SAFE.

However, farmers won’t be able to enroll additional acres in the CRP until congress has passed a new Farm Bill. As he has repeatedly over the past few months, Vilsack faults the U.S. House for failing to act before the 2008 Farm Bill expired September 30th — leaving the Conservation Reserve Program and other U.S.D.A. programs in limbo.

“By connecting and educating folks about the economic driver that conservation and outdoor recreation is, it is our hope that when congress returns after the election that they finish the work they started,” Vilsack said.

“And I think it is also reinforcing the notion that the plan that some may have to substantially reduce the commitment to conservation is something they should think very carefully about because conservation does not only create new opportunities for landowners and reasonable income, but it also creates jobs.”

A reporter asked Vilsack if it was “fair” of him to hold a news conference in a swing state like Iowa, less than a month before the presidential election — and in a district where two incumbent congressmen are in a tight race.

“It’s the beginning of hunting season, so it’s appropriate to talk about habitat,” Vilsack said. “It’s also, I think, really important to educate people about the link between habitat and conservation and economic development and jobs because that is on the minds of everyone — how do we improve the economy? — and there is obviously money, serious money, that’s spent not only doing the work of creating land like this, but the pheasant hunting that’s going to take place and the people are going to come from all over the place to do that.”

Vilsack cited reports indicating about $3 billion worth of sales and economic activity is associated with conservation and outdoor recreation, like pheasant hunting, in the U.S.

“That generates about $700 million for state and local governments,” he said, “and it helps to employ nearly 31,000 people.”

Gary Matters of Council Bluffs manages the farm Vilsack visited Monday. It’s owned by his father, Fred Matters, who is retired and lives in Urbandale.