You are here: Home / Sports / Cyclones fall short in upset bid against K-State 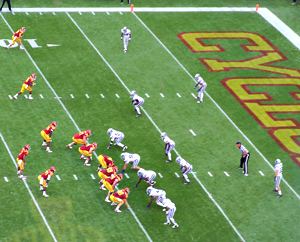 Iowa State’s comeback fell short Saturday as they tried for the second straight upset in Big 12 play and they fell to Kansas State 27-21 in Jack Trice Stadium in Ames.

The Cyclones had two drives late in the fourth quarter, but failed to get a first down in either, on a day when their offense managed just 65 yards rushing and 166 passing.

Coach Paul Rhoads said the Wildcats did everything they wanted to do against his team.

“It reads like a Bill Snyder authored novel, standard Kansas State football game coached by a legendary coach and quarterbacked by a great, great football player. I thought our kids battled the fifth-ranked team in the country tooth and nail right down to the end. I’ve got a very disappointed lockerroom.

Rhoads said it was a game of missed opportunities. “And I think the biggest is getting a fumbled punt and turning around turning the ball right back over the very next play. A very, very big opportunity we had in the football game,” Rhoads said.

That play came in the second quarter as Iowa State trailed 10-7 and recovered the fumble at the K-State 19, but the Jared Barnett’s interception killed the momentum.

Barnett was starting his second game after replacing Steele Jantz.

Rhoads was asked about his performance. “I thought he played well enough for us to have an opportunity to win the football game, he led us to 21 points, which is above what they are giving up,” Rhoads said.

“With two plus minutes left on the clock, we had the ball in our hands and an opportunity to go win, that’s you want your quarterback to do.” 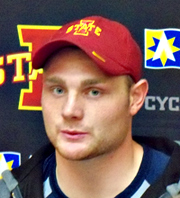 Cyclone runningback Jeff Woody agreed they missed a chance once again to get a win.

“The sad thing is, it’s the fourth year in a row, this game is a game of missed opportunities. The thing with Kansas State that is most impressive about them is, it’s not their six wins, it’s their zero losses. If you are going to beat Kansas State, you can’t beat yourself, because that’s what they want you to do,” Woody explained.

Woody was asked if the failure to do anything in the last two drives of the game was symbolic of the problems with the offense. “I don’t want to say it’s emblematic of the entire day, but there were a couple of times where we felt we had it rolling and then all of a sudden we kick ourselves in the butt,” Woody said.

“It’s exactly what Kansas State’s m-o is, they are not going to beat you, they going to wait for you to beat your, and then they are going to take advantage of it.”

The loss was important because it is a conference game, but Woody said this game has also developed into a rivalry. “I don’t know if it’s because of location or history, or the fact that the last four years have been complete nail biters. It’s come down to the final what, two minutes of the game in the last four years…we are so close and we are such similar schools that it kind of breeds a rivalry,” Woody said.

The loss came before a stadium record crowd of 56,800 and dropped Iowa State to 4-2 on the season and 1-2 in the Big 12. They are on the road at Oklahoma State Saturday.