You are here: Home / Crime / Courts / Teacher charged with having sex with four students 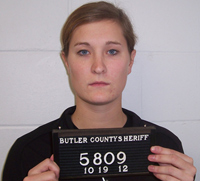 A 24-year-old northeast Iowa teacher has turned herself into authorities after admitting she had sex with her students.

Ashley Anderson was hired in 2010 to teach math at Aplington-Parkersburg High School. She resigned October 5. Anderson has been charged with four counts of sexual exploitation by a school employee.

According to court records, Anderson has admitted to engaging in sexual misconduct with four different students — all male — and she sent nude photos of herself through text messages to each of them.

One was an 18-year-old high school senior; another turned 18 during the school year. The other two were 16 year olds.

Anderson was an assistant track coach for Aplington-Parkersburg and the prom advisor.