You are here: Home / News / LA Mayor wants to figure out how to move America to “radical middle” (AUDIO) 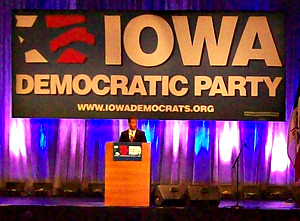 Villaraigosa joins a list of former and future presidents and vice presidents who’ve been speakers at the same event in the past. Villaraigosa spoke with Radio Iowa before his speech this evening.

As for whether Villaraigosa might run for president in 2016, Villaraigosa said he plans to “reflect” when his term as mayor ends in the middle of next year before deciding what he’ll do next.

“I want to figure out how we move America and, importantly, my state, toward what I call a radical middle,” he said.

Villaraigosa described himself as a Democrat — “without question” — but he said the political system is “broken on both sides, but I think it’s more broken on the right by far.”

Villaraigosa emphasized that he’ll taking a “temporary time out” after his term as mayor ends June 30.

“I intend to continue to serve in some capacity, even if it’s not in elected office,” Villaraigosa said.

AUDIO of Villaraigosa’s speech at the 2012 Jefferson-Jackson Day Dinner.

Villaraigosa supported Hillary Clinton during the 2008 primary and caucus season, and President Obama tapped Villaraigosa to serve as the chairman of last month’s Democratic National Convention.

Villaraigosa spoke at a get-out-the-vote event held earlier this afternoon at the La Tapatia Tienda Mexicana grocery store in Des Moines. During his interview with Radio Iowa a few hours later, Villaraigosa said he was “concerned” about the Iowa secretary of state’s effort to review voter registration records to check for fraud.

“It’s amazing that a secretary of state whose job is to promote more voting, protect the Voting Rights Act, encourage people to participate is spending as much time as he is in suppressing the vote and discouraging the vote,” Villaraigosa said> “We’ve seen that across the country with very, very little evidence of fraud.”

Iowa Secretary of State Matt Schultz has a list of 3,500 people who he says may not be eligible to vote, but have registered. A lawsuit has prevented Schultz from cross-checking his list with a federal database. However, a state agent has been reviewing the list.

Two Canadians and a Mexican citizen who voted in elections in Pottawattamie County have been charged with voter fraud this fall, along with two other people who were felons who registered to vote.