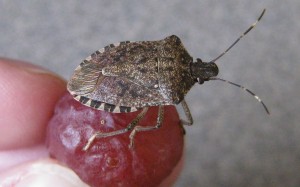 Insect specialists are warning Iowans about a destructive pest that’s moving into the state.

“When this thing invades, they have tens of thousands of them on the sides of their house. So our population, although we think it is established here, is very small compared to what others have reported in other parts of the United States and what it is likely to be (in Iowa),” Lewis said.

The insects are called stink bugs for good reason. “These bugs stink,” Lewis said. “And they will bring that smell with them into the house.”

Aside from the foul odor, the stink bug is known for its ability to destroy plants. “And, when I say plants, it’s all of them,” Lewis said. “It’ll be trees, shrubs, vegetables, fruits, corn, soybeans and other field crops. Damage…will happen later on as the populations build up.”

The first breeding infestations of brown marmorated stink bugs were confirmed earlier this month by I.S.U. entomologists in Scott County. Detections of the bug have now been reported in at least 38 states.

The stink bug was first identified in Pennsylvania in 2001.

Lewis made his comments on the “Talk of Iowa” program on Iowa Public Radio.