You are here: Home / News / New survey to be a guide for improvement to state parks 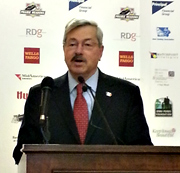 The results of a statewide survey released today will be used to devise a plan to make improvements to Iowa’s 87 state parks.

The Iowa Parks Foundation (IPF) financed the survey with private donations and will also pay for development of the strategic plan.

Joe Gunderson, Secretary of the IPF Board, said the survey makes it clear that state parks are important to Iowans.

“Almost 80-percent of Iowans use Iowa State Parks,” Gunderson said. “It is the single greatest, most used Iowa state asset. Nothing else is used like our state park system.”

Gunderson said the next step involves the development of a strategic plan to implement the desired improvements. “We hope to stand here in front of you a year from now and show you those results,” Gunderson said at a statehouse news conference. He was joined by IPF Treasurer Mark Doll.

“We’re going to go through a thorough planning process and we are going to raise money for that,” Doll said. “That’s going to be 100-percent funded by this group again – by individuals, corporations and families. That’s the next piece. We’ve got the survey done and now we’ll do the strategic plan to be sure we know where we’re going next.”

Governor Terry Branstad and former Congressman Neal Smith founded the IPF in 2008. Branstad believes improvements to Iowa’s State Parks can be paid for with both private and public dollars.

“I think if you want to look at how things like this can be accomplished – look at the Iowa State Fair Blue Ribbon Foundation and how that was so successful in getting private sector support and legislative support, making sure we had an effective partnership that’s led to the revitalization of the Fairgrounds,” Branstad said.

The governor doubts Iowans would support a “park user fee” as a way to cover the costs of fixing up the state parks. “We tried that once and it was not a good experience,” Branstad said. “A lot of time was spent trying to collect a relatively small amount of money and it drove down the participation and use of our parks.”

The survey found nearly four out of five Iowa households have been to an Iowa State Park in the past two years. Branstad is hoping many of the improvements to the parks can be completed by 2020, which will mark the centennial of the founding the Iowa Parks System.