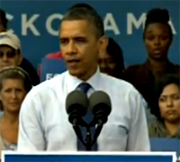 President Obama has embarked on a barnstorming tour of swing states and he rallied with about 3500 people at the Mississippi Valley Fairgrounds in Davenport this morning.

“This is the first stop on our 48-hour, fly-around, campaign marathon extravaganza,” Obama said to open the rally. “We’re going to pull an all-nighter.”

Obama spent the last half of his speech outlining goals for a second term, including tax policies, initiatives to boost fuel efficiency and renewal fuels as well as plans to hire 100,000 more math and science teachers.

“I want everybody out there to compare my plans to Governor Romney’s,” Obama said. “Have the information you need. See which plan is better for you and for America’s future.”

The president opened his remarks by attacking rival Mitt Romney, joking that recent remarks from Romney suggest the former Massachusetts governor is suffering from memory loss.

“We’ve come up with a name for this condition. It’s called Romnesia,” Obama said. “Romnesia — I want to go over the symptoms with you, Davenport, because I don’t want you to catch it. I don’t want it to spread. If you say you won’t give a big tax cut to the wealthy, but you’re caught on video saying your tax cut would include the top one percent, then you might have Romnesia.”

Obama offered a litany of “symptoms”, including Romney’s remarks about having Detroit auto companies go through bankruptcy and Romney’s arguments against hiring more teachers.

“We joke about Romnesia, but all of this speaks to something that’s really important and that is the issue of trust,” Obama said. “There’s no more serious issue on a presidential campaign than trust. Trust matters.”

This is Obama’s 10th trip to Iowa this year, a signal of the state’s importance in campaign calculations, as Obama and Mitt Romney aim for the required 270 votes in the Electoral College — and Iowa’s six votes are up for grabs.

“Now it’s up to you, Iowa. Right here, right now, today — you’ve got a chance to choose the path that we’re going to take from here…to choose the future that you want to see,” Obama said.

Romney is due to campaign in Cedar Rapids this evening and he’ll return to the state for an event in Ames on Friday.

(This story was updated at 11:45 am with additional information.)