You are here: Home / Agriculture / Voices of Iowa farmers heard in new book about evolving “Farmscape” 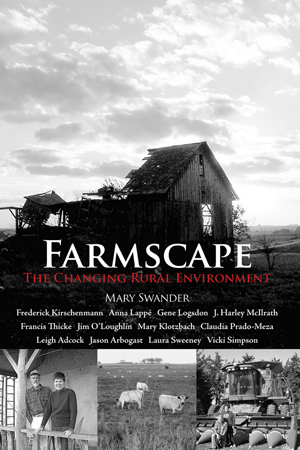 A new book about the changing face of Iowa agriculture is the subject of an event tonight in Cedar Falls.

“Farmscape” is inspired by the community play of the same name, pitting an organic farmer against a neighboring large-scale livestock confinement operation.

The book features that play and the work of several Iowa writers, including Vicki Simpson, spokeswoman for the Hearst Center for the Arts in Cedar Falls.

“The book contains the script and it’s a docu-drama so it’s exact verbiage from farmers themselves and vintners and a variety of folks,” Simpson says.

“It’s an anthology, so we have a variety of authors, including myself, put together essays about the changing rural environment.”

The book and the play started out as a class project at Iowa State University in 2007.

Mary Swander, an ISU English professor and Iowa’s poet laureate, sent her students out to interview dozens of Iowans involved in agriculture.

Their work was eventually incorporated into a stage production and “Farmscape” was first performed at the University of Northern Iowa in 2009.

Tonight’s event at the Hearst Center in Cedar Falls starts at 6 P.M. and will feature cast members from that original production. “Just a real casual gallery talk about their experiences with ‘Farmscape’ and at 7, we have an open mic opportunity for emerging writers to get up and read their works,” Simpson says.

“At 8, we have Mary Swander, the overall author and editor of ‘Farmscape,’ will be reading from the book and sharing her experiences with ‘Farmscape.'” She says this depiction of the state of agriculture is important because it starts a conversation between urban and rural residents.

“Often the twain never meet and yet we depend on farmers for our very livelihood, our sustenance comes from them,” Simpson says. “We don’t understand what they go through, those of us who live in the city, so I wanted that conversation to be opened up.”

The book was published by Ice Cube Press, based in North Liberty.