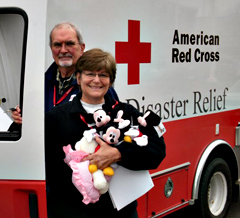 Red Cross volunteers Tony and Dellaine Spencer of Panora, ready to head for the East Coast.

A group of American Red Cross members from Iowa is preparing to assist the victims of Hurricane Sandy.

“We’ve got 10 volunteers on those five trucks and we also have another group of volunteers that are helping out in a leadership fashion…so currently we have 14 of the Iowa volunteers over there and many on standby to obviously go in as soon as the airports reopen and we can assess where the need is the greatest,” Pech says.

She says the Red Cross members will be scattered all over the eastern part of the country.

“We will be all up and down the eastern seaboard at this time, obviously New York, Pennsylvania, New Jersey, West Virginia …Baltimore, Maryland, I know we had a crew going there. There’s just going to be a lot of areas where people are going to be in need,” Pech says. If you want to help out, Pech says the best way is to make a donation to the Red Cross effort.

“A financial donation goes so far, just two dollars will provide snacks to kids who are in the shelters. Ten dollars provides a warm hot meal to shelter residents as they are waiting out the storm or until they get power restored to their homes. A financial donation is the best way to do that,” Pech explains.

“They can do that by going to www.RedCross.org, texting the word ‘Red Cross’ to 90999 or calling 1-800-RED-CROSS. Just be aware that the 1-800-RedCross is also our emergency line, so that may be tied up right now.”

Reports say as many as 16 people have died in the storm.