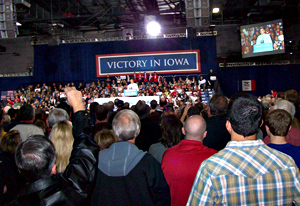 Republican presidential candidate Mitt Romney spoke to about 4,500 people at a rally in Des Moines this morning, asking them to make “one final push” on Election Day.

“I need Iowa. I need Iowa so we can win the White House and take back America, keep it strong, make sure we always remain the hope of the Earth. I’m counting on you. Will you get the job done?” Romney shouted at the close his remarks.

The crowd roared its response.

Romney spoke for over 20 minutes, faulting President Obama for peddling “hollow rhetoric” rather than solutions for the nation’s economy.

“Does raising taxes put people to work? How about his avalanche of new regulations — did they help small businesses?” Romney asked and the crowd responded, “No,” to both questions. Romney continued: “You see, almost every measure he took hurt our economy. It hurt our fellow Americans.”

Romney’s running mate Paul Ryan will speak at a rally in Des Moines on Monday night, but this morning’s speech was Romney’s final go at personally making the case in Iowa for his own candidacy.