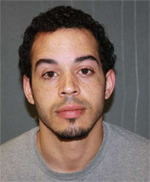 Authorities made a quick arrest following a bank robbery Saturday morning in northwest Iowa. Sioux City Police say a man armed with a gun confronted an employee at the Heritage Bank at 4530 Singing Hills Boulevard as she was opening the bank just after 7:30 a.m.

Police say the suspect demanded money and left with an undisclosed amount of cash. The suspect was spotted a short time later in Sergeant Bluff and was taken into custody by officers. All of the money was recovered along with the handgun.

Twenty-six-year-old Johnnie Hawkins, Jr. of Sioux City is charged with first-degree robbery, felony assault and felon in possession of a firearm. Hawkins is in custody in the Woodbury County Jail.

No one was injured in the course of the robbery and arrest.