You are here: Home / News / New GOP leader got “perspective” during time away from legislature 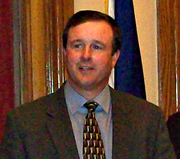 There was a changing of the guard in the Iowa Senate Wednesday afternoon as Senate Republicans met privately and unanimously elected a new leader.

Senator Bill Dix of Shell Rock served 10 years in the Iowa House, but lost a bid for congress in 2006. In 2010, Dix won a seat in the state senate, but Dix says he returned with a “new recognition” of the challenges in state government.

“The four years that I was out of the legislature changed my perspective a little bit on what I thought we needed to accomplish in the legislature,” Dix says.

In addition, Dix says his wife and kids “keep him grounded” and are a constant reminder of why he’s doing what he’s doing,.

“Michael’s 14. Will is 13 and Libby is 11…They grew up in this. You know when I was in the House, first elected, we didn’t have any children, so in some ways it’s an environment that they’re very accustomed to,” Dix says. “It’s fun talking with them about government in school and they’re quick to point out how the textbooks are not always completely accurate in how the work of the people gets accomplished.”

Dix is among a group of legislators who’ve met once a week, when the legislature is in session, to play basketball. Dix admits the game appeals to his competitive nature.

“I’m going to have my 50th birthday here,” Dix says, with a laugh. “I’m not as skillful on the floor as a player anymore, but I still enjoy playing when I have a chance and enjoy the game very much.”

“This probably doesn’t come as a that big surprise, but my work in the legislature is really driven by a desire to analyze, regularly, how we spend our resources and figure out a better way to get services to the people of Iowa,” Dix says.

Dix made his comments during an interview with Radio Iowa late yesterday afternoon.

Dix is a 1981 graduate of Janesville High School. After earning a degree from Iowa State University in 1985 he lived in Minnesota and worked as a salesman for Cargill.

Dix returned to Iowa in 1991 to farm with his father. In 2007, his dad retired and Dix became sole owner of the operation, which produces pumpkins and cantaloupes.