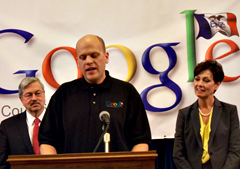 Chris Russell of Google annonces another expansion of its data centers in Council Bluffs as Governor Branstad and Lt. Governor Reynolds listen.

Google’s search for more space for it’s data centers has once again turned up Iowa.

“Today I would like to announce that we are increasing our investment in this new data center by 200-million. This includes increasing the size of the building as well as deploying in Iowa even more of the computing infrastructure that runs Google,” Russell says.

“In fact the construction of the expansion is getting underway now.”

The data centers store much of the information used by the internet search company in its operations. Russell says the new money being brought into Iowa has great significance.

“This investment pushes us past a very important milestone. Google has now invested over one-point-one-billion in Iowa in just five short years,” Russell says. Governor Terry Branstad was on hand for the announcement along with local and state officials from Council Bluffs.

The governor recalled the recent groundbreaking for the second Google data center. “I said at that time that I hoped to see Google expand even more. Little did I know that it would be so quick,” Branstad says.

“But thank you very much, you made my day. The people of Council Bluffs and the people of Iowa appreciate the confidence you have shown in our state. This is a company that has a great worldwide reputation.” Google has created over 130 new jobs at its data centers thus far.

Russell could not say how the expansion would impact the number of jobs as the company. “Now we’re staring on the building, and of course there will be jobs connected with this. But right now we are just focusing on the building, so we don’t have that number,” Russell says.

Governor Branstad says the impact immediately will be on the construction jobs needed to build the expansion. Russell says people in the area will notice a difference in the original plan for the second data center. “The original footprint of the building that we announced this summer will be increased quite a bit, so it’s gonna be definitely additional construction,” according to Russell.

This announcement comes on the heals of Google’s plans to invest $75-million into a wind farm near Rippey. The company says that wind farm will produce enough electricity to power 15,000 homes.